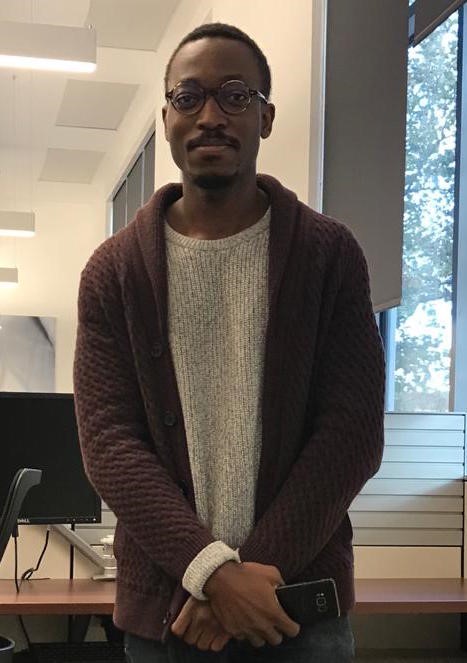 About me: I grew up in Lagos, Nigeria and immigrated to Brooklyn in the winter of 2007. About a year later, I enrolled in Brooklyn College where I pursued an undergraduate degree in Chemistry. In 2010, I was accepted into the Minorities Access to Research Careers (MARC) program and got the opportunity to work in the labs of Profs. Mark Kobrak, Sanchez Delgado and Luis Quadri. The MARC program also facilitated short research internships at Albert Einstein College of Medicine and The Johns Hopkins University of Medicine in the summers of 2010 and 2011 respectively. The effects of these experiences were two-fold. Firstly, it solidified my interest in pursuing a research career while exposing me to the expectations and possible struggles that accompany the pursuit of a doctoral degree. Secondly, and perhaps more importantly, I was able to interact with other minority scientists, which gave me the confidence to pursue a research career.

After graduating in 2012, I moved to Philadelphia and began my doctoral studies in the research group of Professor Eric Schelter at the University of Pennsylvania. My research work at Penn focused on designing strategies for the synthesis and stabilization inorganic complexes featuring multiple bonds between lanthanides and main group elements. Grad school can be brutal especially at the beginning. However, things do eventually get better if you are passionate, willing to learn from your mistakes and persevere.

About My Work: I currently work as a researcher at Axalta Coating Systems’ Global Innovation Center (GIC) located in Philadelphia. I like to think of my job as having two sides. On one hand, I design experiments, coordinate and manage associate investigators who are responsible for running said experiments, analyze results which inform further studies, and write reports or patents depending on the organization’s overall strategy. On the other hand, I am responsible for communicating my work to teams either within or outside the organization in a concise and sometimes not-too-technical manner. I’ll argue that a solid graduate school education provides anyone with the requisite skillset to perform these tasks successfully. However, my time in graduate school didn’t prepare me for the sheer number of meetings I have had to attend since starting my career. More often than not, a career in industry entails working in teams of varying sizes. Since I work for a company with a global footprint, I have colleagues scattered all over the world that I have to update on the status of my projects. Thus, I have had to get used to having meetings at odd hours. While my training as an inorganic chemist plays an instrumental role in my ability to effectively do my job, I have had to develop new skill sets in order to stay relevant as a formulator. I’ve certainly earned a greater appreciation of the bulk properties of materials over the past 2 years and I like to think of myself more as a hybrid inorganic chemist/materials scientist now.

A typical day starts with a cup or two of coffee. I then spend about 20 minutes responding to emails followed by either attending an early meeting or skimming newly published journal articles or patents relevant to my projects. After this, I review results from experiments conducted the previous day and try to make sense of what they mean. The rest of my day is spent attending meetings, writing, brainstorming experiment ideas and designing said experiments.

Advice About Entering the Field: Becoming a researcher requires healthy doses of curiosity, optimism and passion. Curiosity to ask questions in the first place, optimism that the right answers or resolutions can be found and passion to keep going when it seems like absolutely nothing works.  I also believe it is essential to seek out mentors and ask as many questions as possible. My graduate training has gone a long way in developing my ability to deliver on my projects in a timely fashion, but I am also picking up new skills every day which makes my job exciting. For example, I learned how to use statistical Design of Experiments (DOE) at my job and its addition to my problem solving toolbox has been quite transformative in helping me design targeted experiments for the complex systems I work on.

Your friendly neighborhood administrator. View all posts by bcchemcareers

Each month, a friend of the department will write a blog entry and respond to as many student requests as they can.  This is purely voluntary – our guests get nothing for their work!  Please be polite and remember that they are trying to help you, our student.